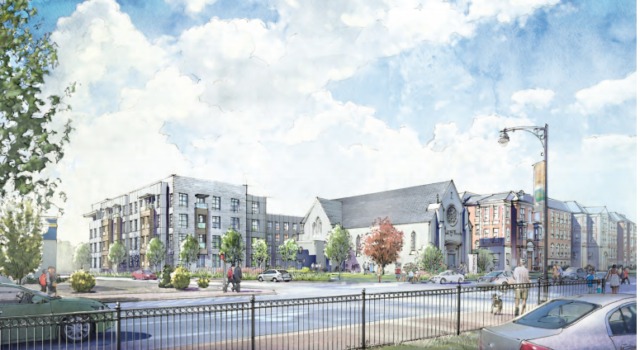 Town councilors unanimously approved plans for the proposed development of 294 new apartments and renovation of 36 rooms for the Sisters of St. Joseph property on a 22-acre parcel at the corner of Park Road and Prospect Avenue Tuesday night.

The project is currently called One Park Road and replaces plans approved in 2016. The project will include a total of 238,000 square feet and a $60 million investment.
Though the project received support from community members at the lengthy public hearing, some residents living on Ringgold, Gillette and Crescent streets said they were concerned about traffic as well as the construction schedule, especially taking into account nearby construction of the 25 units at the former Patrissi Nursery.

West Hartford’s Town Council chambers was full as residents and interested parties listened to a proposal to redevelop and renovate the Sisters of St. Joseph property at the corner of Park Road and Prospect Avenue in West Hartford during a public hearing Tuesday. Mayor Shari Cantor said the proposed development would build on the character of the Park Road neighborhood.
“There’s a ton of character, very authentic,” Cantor said. “I think the project and design marries all of that together.”
Republican town councilor Chris Williams said: “My concerns are with zoning consistency with the neighborhoods – this fits that bill.” The name of the development may change, according to Robin Pearson, who represented the applicant, Martin Kenny.

One Park Road includes the renovation of 36 rooms for the Sisters of St. Joseph and 294 new units, ranging from studios to three-bedroom apartments. Town Planner Todd Dumais said the breakdown of apartments includes 158 studios, 99 one-bedrooms, 33 two-bedrooms and four three-bedrooms.